Inspired by the attack in a gay nightclub in Orlando where 49 people were killed, La golondrina (The Swallow) explores how loss can simultaneously separate and unite people. The production reflects on how so many lives continue to be stolen by attacks on the LGBTQ+ community in this country and how we need to heal together despite our differences. 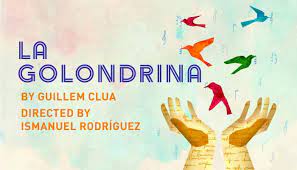 Repertorio Español will premiere La golondrina (The Swallow), written by award-winning Catalan playwright Guillem Clua. The play will be directed by Ismanuel Rodríguez and stars Zulema Clares and Rafael Sánchez. The production will start previews on January 20th and premiere on January 27th on the iconic (Gramercy Arts Theatre) stage.

Sunday, January 22nd, a Q&A session will be held at the end of the performance featuring Playwright Guillem Clua, the director Ismanuel Rodríguez, and the cast. The production is presented in Spanish with English subtitles, and the press is invited for any performance between January 22nd and February 5th.

Ramón wants to work on his vocal technique before singing at the memorial service for his beloved mother and seeks the help of strict singing teacher, Amelia. During an explosive evening of confessions, it becomes clear that they are united by more than just music, as both struggle, in their own way, to deal with the aftermath of a terrorist attack.

What makes us human? From Amelia's point of view, a deeply wounded mother, what makes us human is the capacity to feel others' pain as our own. When an indiscriminate attack happens, we are all victims who must deal with the same crossroads: hate or love. Our world depends on the direction we decide to take. --Guillem Clua.

Catalan playwright Guillem Clua is one of the most awarded and translated playwrights in the country, with a remarkable career in Barcelona, Madrid, and abroad. His most recognized texts are La piel en llamas (2004), Marburg (2010), Smiley (2012/2020), La golondrina (2018), and Justicia (2020, National Award of Dramatic Literature), as well as other comedies, adaptations of classics and musicals. Clua also has a long experience as a teacher, stage director, and screenwriter. He has recently adapted La piel en llamas, Invasión and Al damunt dels nostres cants for the movies and Smiley into a series for Netflix. His latest films are The Communion Girl and the adaptation for the big screen of The Crooked Lines of God.

More performances are available through 2023.