The Festival Eñe 2022 includes a focus on Catalan literature

The literary event from Madrid and Malaga celebrates this year a “Window to Catalan literature” with authors like Enric Casasses, Carles Rebassa, Maria Callís, Josep Maria Miró, Mercè Ibarz, or Marina Rossell, among others. 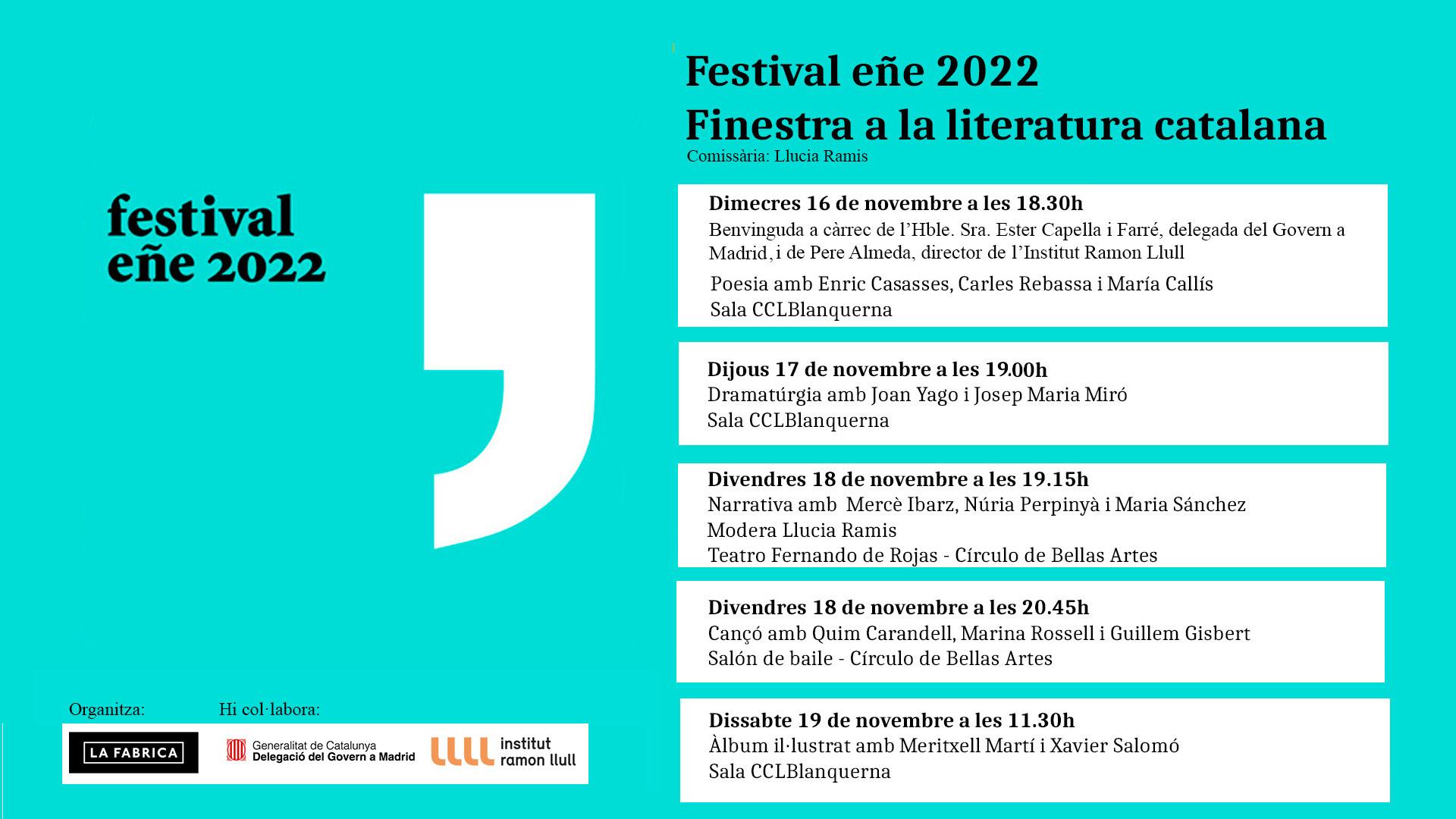 Poetry, drama, illustration, narrative, and Catalan song are part of the programme for the 14th edition of the Festival Eñe de literatura, which will take place from November 11th to 27th between Madrid and Málaga. For the first time, the event is celebrating a focus on Catalan literature, with the participation of authors like Enric Casasses, Carles Rebassa, Maria Callís, Josep Maria Miró, Mercè Ibarz, or Marina Rossell, among others.

The events of the “Window to Catalan literature”, which will take place at the Centre Cultural-Llibreria Blanquerna and at the Círculo de Bellas Artes de Madrid, have been curated by the writer and journalist Llucia Ramis, and they are produced by the Institut Ramon Llull and the Delegació del Govern a Madrid.

This year’s edition of the Festival Eñe shows a broad programme of activities with literature as a central axis, as well as a bulk of events such as conversations, recitals, debates, and various gatherings, with the participation of more than a hundred authors and artists.

It is noteworthy that Pol Guasch will receive the Premio Festival Eñe Talento a Bordo, which will be handed for the first time as recognition to emerging authors. The 24-year-old Catalan writer and poet published his first novel, Napalm al cor, in 2021.

On another note, the Catalan poet and translator Xavier Farré Vidal will take part in a session with the translators Joanna Maria Ostrowska, Daniel Ordóñez Franco, Sara de Barnús Domínguez, Ivana Palibrk, and Carmen Clavero Fernández at the Biblioteca Regional de Madrid Joaquín Leguina in November 12th at 6pm, where the work of some European young authors will be presented.

The five activities of the Catalan literary focus will take place in Madrid for four consecutive days, from 16th to 19th November, at the Círculo de Bellas Artes and at the Centre Cultural-Llibreria Blanquerna.