Pace presents an exhibition of work by Antoni Tàpies, who made an indelible mark on the history of art in postwar Europe, North America, and Asia. The presentation, titled Antoni Tàpies: Transmaterial, takes place on the eve of the centenary of the Catalan Spanish artist’s birth. It will showcase some 20 paintings created by Tàpies between the 1990s and early 2000s—Pace has represented the artist for 30 years, and almost all the works in this show were created after Tàpies joined the gallery. Marking the first exhibition dedicated to the artist to be staged at Pace’s New York gallery since 2015, the presentation spotlights Tàpies’s meditative approach to art making, shedding light on the later years of his life and career. The exhibition is curated by Natasha Hébert, the artist’s daughter-in-law. 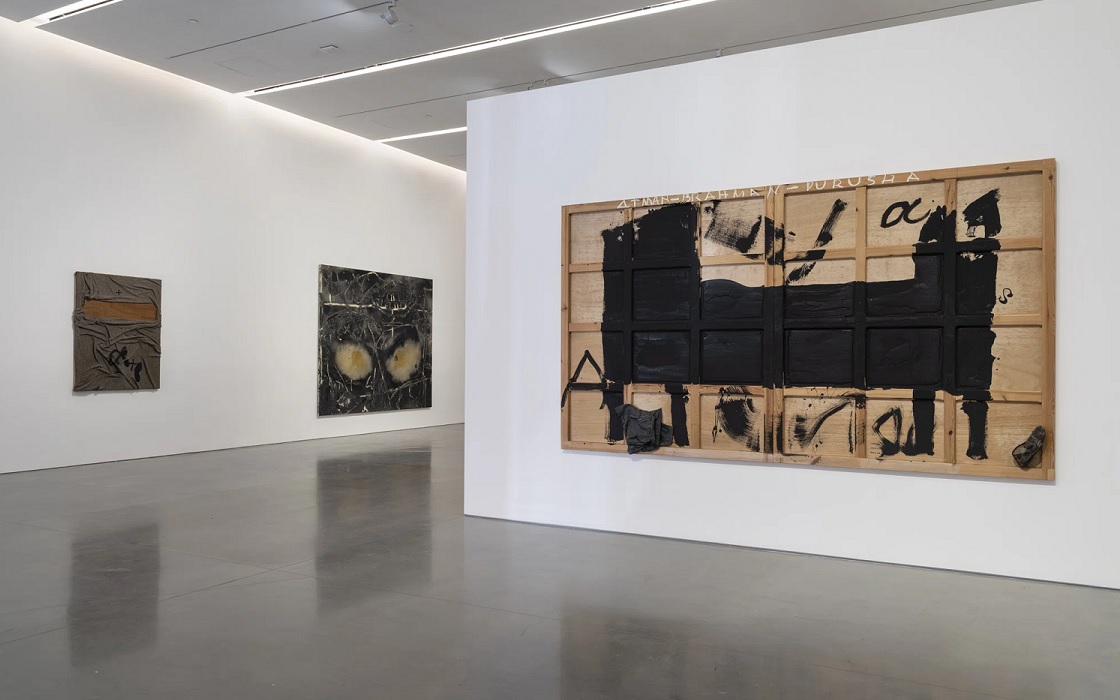 Born in Barcelona in 1923, Tàpies was a self-taught artist who developed a unique visual language centering on exchanges among symbols, gestures, and materials. The artist, also a celebrated theorist and philosopher, incorporated signs and symbols from Catalonia and other cultures into his paintings, collages, and sculptures, imbuing his work with historical allusions and references to phenomena of the natural world. Mysterious and transcendent, Tàpies’s work, which is replete with personal resonances as well as references to political and social struggles in his native Catalonia and Spain, charted new frontiers in painting during the postwar era.

Over the course of his seven-decade career, Tàpies pursued tireless investigations of forms and raw materials. The artist’s inventive, idiosyncratic combinations of media as diverse as wood, dirt, spray paint, cardboard, blankets, clothes, carpet, furniture, and marble dust reflect his intense interest in experimentation. Tàpies forged complex layers of materials like these in his compositions, bringing striking amalgams of color and texture to the fore of his work. His reimagination and redefinition of painting as a highly physical undertaking would inspire future generations of artists, including major figures working today.

The artist participated in the Venice Biennale exhibitions in 1952, 1954, and 1958 before being chosen to represent Spain at the 45th edition of the Biennale in 1993, when he won the Golden Lion for his large-scale installation titled Rinzen. In 1984, the artist established the Fundació Antoni Tàpies in Barcelona—which opened a museum and library in 1990—to support the exhibition of his work and that of other modern and contemporary artists. Along with the Fundació Joan Miró and Museu Picasso, the Fundació Antoni Tàpies remains a key cultural institution in the fabric of the Spanish city.

The works in Pace’s forthcoming presentation exemplify Tàpies’s interest in enactments of transgression and erasure as well as explorations of the aging body, sex, and death in his art. Among the highlights in the exhibition are the large- scale painting Soc terra (2004), which includes enigmatic plays of spray paint, pencil, and soil on canvas; Manta amb petjades (2001), a painting on a blanket glued on wood; and the painting Mitjons negres (2010), created just two years before the artist’s death in 2012. These and other works in the exhibition reflect Tàpies’s longtime pursuit of visual and spiritual transfiguration and transformation.

In 2023, on the occasion of the centenary of the artist’s birth, Pace will present an exhibition dedicated to Tàpies at its Los Angeles gallery, and the Fundació Antoni Tàpies will mount an important exhibition of the artist’s work in Barcelona. A retrospective of Tàpies’s career—curated by Manuel Borja-Villel, director of the Museo Nacional Centro de Arte Reina Sofía in Madrid—will open next year at Bozar - Centre for Fine Arts in Brussels. In 2024, the retrospective will travel to the Reina Sofía.

Antoni Tàpies is recognized as one of the leading artistic voices to emerge from postwar Europe. Working in parallel with global art movements including Abstract Expressionism, Gutai, Art Informel, Tachisme, and Arte Povera, Tàpies believed that his era required a new kind of existential expression. Tàpies’s oeuvre resides between figuration and abstraction, matter and mysticism, as manifested through his painting, sculpture, drawing, collage, and printmaking.