At Home with Literati, hosted by Literati Bookstore in Ann Arbor, Michigan, is pleased to welcome Megan Berkobien & María Cristina Hall to our At Home with Literati Series in support of their translation of Monserrat Roig’s first novel, Goodbye, Ramona, published in English by Fum d'Estampa Press. 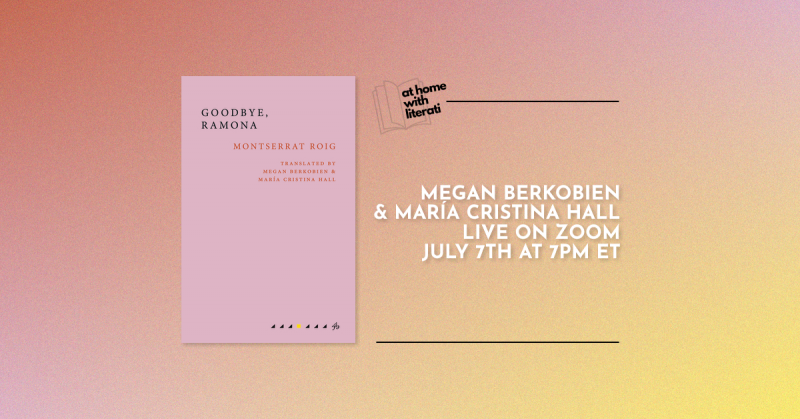 Monserrat Roig’s first novel, Goodbye, Ramona (1972), is a powerhouse story told through the points of view of three generations of women from the same family. Opening with scenes of a pregnant woman looking for her husband after the bombing of Barcelona’s Coliseum, Goodbye, Ramona explores the role of family, women’s relationships with men, the influence the weight of history and events out of women’s control have on them, and the silence in which women live their lives. Sweeping and dynamic, the historical and social mosaic of late nineteenth- and early twentieth-century Spain is seen through the lives and experiences of these female characters.

MONTSERRAT ROIG was a novelist, short story writer, investigative journalist, and feminist activist, described by the poet Marta Pessarrodona as the “first female total writer Catalan literature has had.”

MEGAN BERKOBIEN is an educator, translator, and organizer. She holds a PhD in comparative literature from the University of Michigan and is the founder of the Emergent Translators Collective.

MARÍA CRISTINA HALL is a Mexican American poet, translator, and immigration activist. Her translations have appeared in Words Without Borders, The Offing, and Alchemy, among other outlets.

At home with Literati: