"In 2006 the Barcelona artist and filmmaker Mireia Sallarès began interviewing, in complete intimacy, about thirty Mexican women, about just that: being women in Mexico and their sexual experiences – their experience with pleasure and also with violence. The result is LAS MUERTES CHIQUITAS, ‘the little deaths’, which, like the French ‘la petite mort’, is a slangy euphemism in Spanish for female orgasm, the post-orgasmic state of unconsciousness that some experience after sex." 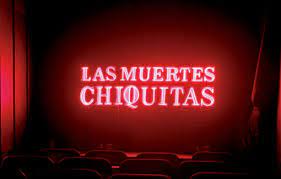 "This wild, five-hour film is revolutionary…. […] Sallarès uses the simplest of means, filming by herself, entirely in medium close-ups, as she interviews, among many others, two anthropologists, a performance artist, an AIDS worker, a few sex-workers, a cabaret artist, two psychoanalysts, an historian, two ex-nuns, a journalist, a cross-dressing bisexual-tranny, a housekeeper, an actress, a philosopher, two guerillas, even exiled women from other countries…. She asks them to talk about, at first, their own orgasms. What emerge are extraordinary stories and images of pleasure, and often damage.

“The film’s subtitle, ‘An unfinished story of pleasure and violence’, helps connect the dots. There is abundant sexual violence against and around women in Mexico, and effective resistance. Sallarès’s correspondents are prepared to talk about their histories and so the film goes there – not just to the violence but also to the relationship between violence and sexuality, and soon enough to violence, sex, pleasure and spiritual release. These are models to learn from and admire. The critic Helena Braunštajn says this film is a place ‘where pleasure is related to armed struggle, feminicide, transsexuality, women’s liberation theology, prostitution, illness, exile, the plurality of Mexican identity, and the ethical commitment of art to socio-political reality.’ One woman says orgasm is ‘like grabbing onto the wings of an angel who lowers me down to the ground.’ Enough said.” –Jill Godmilow

This screening is part of: LET'S TALK ABOUT SEX