Peñas' training began with classical studies and later progressed to jazz. His innovative compositions have won the USA's press and audiences' attention, attracting a wide variety of fans through its unique combination of different grooves over American jazz base. He leads his band with harmonic imagination and authenticity, writing his original compositions with minimalistic and sensitive musical strokes, exchanging spontaneous creativity with his bandmates. 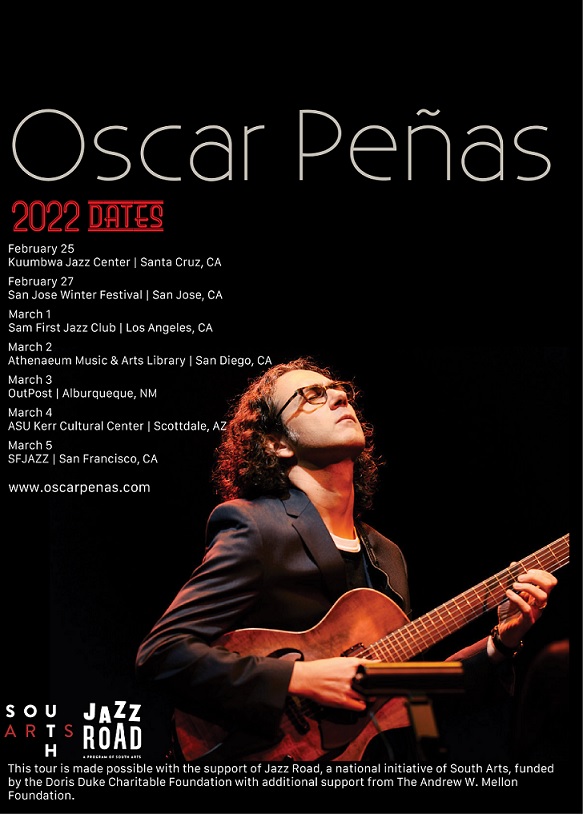 Barcelona born and Brooklyn based guitarist/composer Oscar Peñas first started taking guitar lessons at eight, and at seventeen, he got acquainted with jazz. At twenty-one, he left the law school for his "mistress," music, and at twenty-four, he moved to Boston, where he graduated from Berklee College of Music in 1999 and New England Conservatory of Music in 2007. Since then, he has lived in NYC.

Though his early work was rooted in bebop, he later developed a more personal style thanks to his conversations with the late pianist Cecil Taylor in 2008, who advised him to embrace his cultural heritage. Subsequently, Peñas began crossing jazz with Iberian, South American, and classical strains.

His precise finger-picking technique is not a flashy one. It gives his fellow band members space and shows all its artistry work, retaining considerable humility that remains no less impactful because of it. Frequently, he creates arrangements using the guitar, resulting in a sonic mix that never sacrifices clarity for density or volume despite the added layers of complexity. His compositions are visual with a story tale and improvisation. Oscar's clever musical experimentation is the essence of his style. His diverse use of different genres to express ideas beyond those in his writings creates extraordinary musical experiences through novelty and particular artistic excellence when performing with his band. Peñas' intuition and ear drive him into an amalgam of melodies aiming for the unexpected.

Oscar does not look for cohering to a single signature style sharing his five recordings with renowned American jazz masters such as Gil Goldstein, Paquito D'Rivera, Esperanza Spalding, and Ron Carter, a singularity in writing for non-traditional instrumentation in jazz. As an independent artist who always self-produces his work, it is astonishing to see Oscar's access to the USA's best venues to showcase his work, such as the Kennedy Center, BAM Next Wave Festival, Strathmore, to mention a few.

This tour is made possible with the support of Jazz Road, thanks to a national initiative of South Arts, funded by the Doris Duke Charitable Foundation with additional support from The Andrew W. Mellon Foundation.