The Collateral Event Air/Aria/Aire Catalonia in Venice of the Biennale Architettura 2021, shows the results of a study on air pollution carried out in the city of Venice. 1. At the end of the 17th International Architecture Exhibition – La Biennale di Venezia, the results of the NO2 air pollution campaign in the city of Venice (an initiative of the project Air/Aria/Aire_Catalonia in Venice presented by the Institut Ramon Llull as Collateral Event of La Biennale Architettura 2021) will be disclosed.

Air/Aria/Aire is a collateral event of the Biennale Architettura 2021 curated by Olga Subirós. The project reflects upon the central theme of this edition of Biennale Architettura, “How will we live together?”, with research about air as a common asset upon which our survival depends. Under the name Air, the exhibition highlights the role of architecture and urban planning in the context of two interconnected global crises: climate change and the public health crisis caused by air pollution. This curatorial project shows a research on atmospheric pollution, how it directly affects people in urban environments, and the urgent need to put health at the centre of cities decisions.

2. The project focuses on big data analysis to benefit the public; it identifies the actions needed to rethink urban design, and the need for access to open data. Cities as prolific data producers must be able to protect the sovereignty of these public and private data, so they work for the common good.

3.  One of the goals of the project is collecting data on air pollution in Venice and doing so in a participative way that goes beyond the current resolution obtained from fewer official stations. Architectural students from the Venice School of Architecture (IUAV) have been able to identify the air pollution of their city in collaboration with the research group Open Systems from the Universitat de Barcelona, and the environmental consulting 4Sfera. The action represents the first large-scale citizen science campaign on air quality in Venice.

4. Conducting citizen science implies conducting scientific research with the active participation of citizens. Everyone has the knowledge, tools and resources that might contribute to the progress of science. In this case, the knowledge of young architects about the city has been enhanced with scientific data on the accumulation of NO2 at 25 different locations in Venice. This research has been conducted by 37 students from IUAV, IUAV professor Jacopo Galli, Josep Perelló from Open Systems-UB, Anna Ripoll from 4Sfera and Olga Subirós, curator of the project.

5.  On October 1st, they placed NO2 measuring devices in 25 locations distributed around Venice city centre. The devices are passive dosimeters that consist of a pipe with an end exposed to the environment and a closed end, in which NO2 is carried by molecular diffusion from the open part to the closed one; it is then absorbed by a chemical reagent previously implanted. The devices have been exposed to Venice air for two weeks. Afterwards, they have been analysed at the lab, and the results have been used to produce graphic material that shows cartographic evidence of air pollution in the city of Venice.

6. The used technique is included in the European guidelines on air quality as a complementary technique, and results are akin to the annual NO2 average, a key asset easy to understand both for citizens and public agencies. Therefore, the obtained concentrations show that all the sampling locations have values above the recommended levels of the WHO (annual average of 10 μg/m3). In two cases, Ponte dell’Accademia and Fondamente Nove, the annual average demanded by the European directives might be exceeded.

7a. It should be noted that this NO2 measurement campaign has taken place during times of pandemic, and therefore the obtained results are likely to be significantly lower than would be before Covid-19. At the time of the measurement, Venice was free of cruises, with much less tourism, and therefore with fewer vehicles circulating the canals and polluting the air. Once the Covid-19 measures regulating Venice are lifted, cruises with more than 40.000 tones and transoceanic container vessels will not be able to access the Giudecca canal in Venice that leads to the city centre. They will be instead temporarily redirected to the industrial harbour of Marghera. Passengers will then have to travel to Venice in vaporetto, bus, car or taxi.

7b.The main NO2 anthropogenic source within cities are combustion engines, that is, road traffic. However, in the city of Venice it is mainly maritime traffic with diesel engine.

7c. Long-term exposure to the inhalation of pollutants is the main cause of cardiorespiratory conditions and more than 7 million premature deaths per year (400.000 of which are in Europe). The main pollutants are NO2, O3, and PM (Particulate matter).

8. On September 22nd 2021, the WHO published the new recommended levels facing the scientific evidence that air pollution has a deadly impact on human health. In the case of NO2, the maximum levels are 10 μg/m3. The EU has more soft guidelines –maximum levels of NO2 are 40 μg/m3– that are in process of being reconsidered. The EU acknowledges that air pollution is the main hazard for human health and the environment.

9. The project Air/Aria/Aire is an attempt to support the citizen’s initiative for a better air quality in Venice. In 2017, due to citizen’s pressure for a greater public concern on air quality, the city of Venice installed its first air quality monitoring station ARPAV in the city centre – Rio Novo Street. (Nuova centralina Arpav a rio Novo - La Nuova di Venezia Venezia).

In 2019, due to the measurements results at the station of Rio Novo, the city council issued regulations to restrict air traffic.

There are 5 ARPAV (Agenzia regionale per la prevenzione e protezione ambientale del Veneto) stations near Venice, in Sacca Fisola (urban station), Mestre and Marghera. However, these are at a distance of dozens of kilometres away from the city centre, and they are situated in locations with greater pollutant dispersion. This makes them less representative of the current pollution levels in Venice.

This NO2 mapping campaign in Venice had a previous campaign as a baseline, the one conducted at the beginning of the project with architectural students from the Escola Sert de formació contínua – Col·legi d’Arquitectes de Catalunya, which results were published in Quaderns Biennale 2021: Air, Aria, Aire. The campaign was conducted in February 2021. The dosimeters were exposed to air pollution for the 50% of the time during a period of normal activity in Barcelona; the rest of the time they measured air quality during the Covid-19 lockdown. Despite living with an exceptional reduction of cars in the city, the levels were high or very high, in some cases exceeding the 40 μg/m3 (at Via Laietana Street, for example).

The data collection on NO2 levels in 25 different locations of Venice city centre is a landmark for the city in order to identify pollution levels and make the issue notable at a citizen level. Citizen science, thanks to Air/Aria/Aire, becomes a tool to empower citizens and give them more reasons to demand changes that help us approach a city model that makes citizens health its main priority. 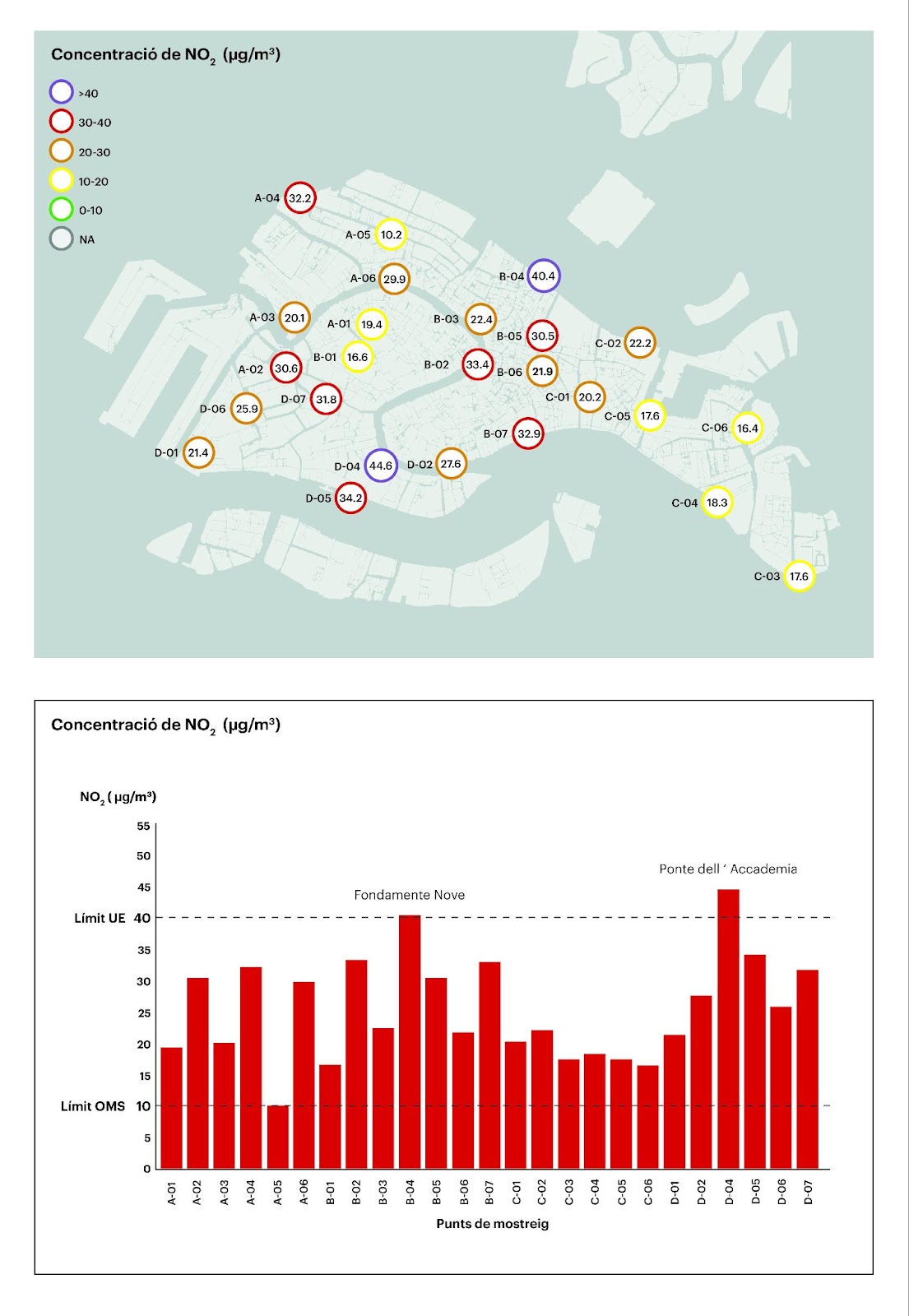 Images 2a: Maps anb bar chart of results. By 4Sfera. 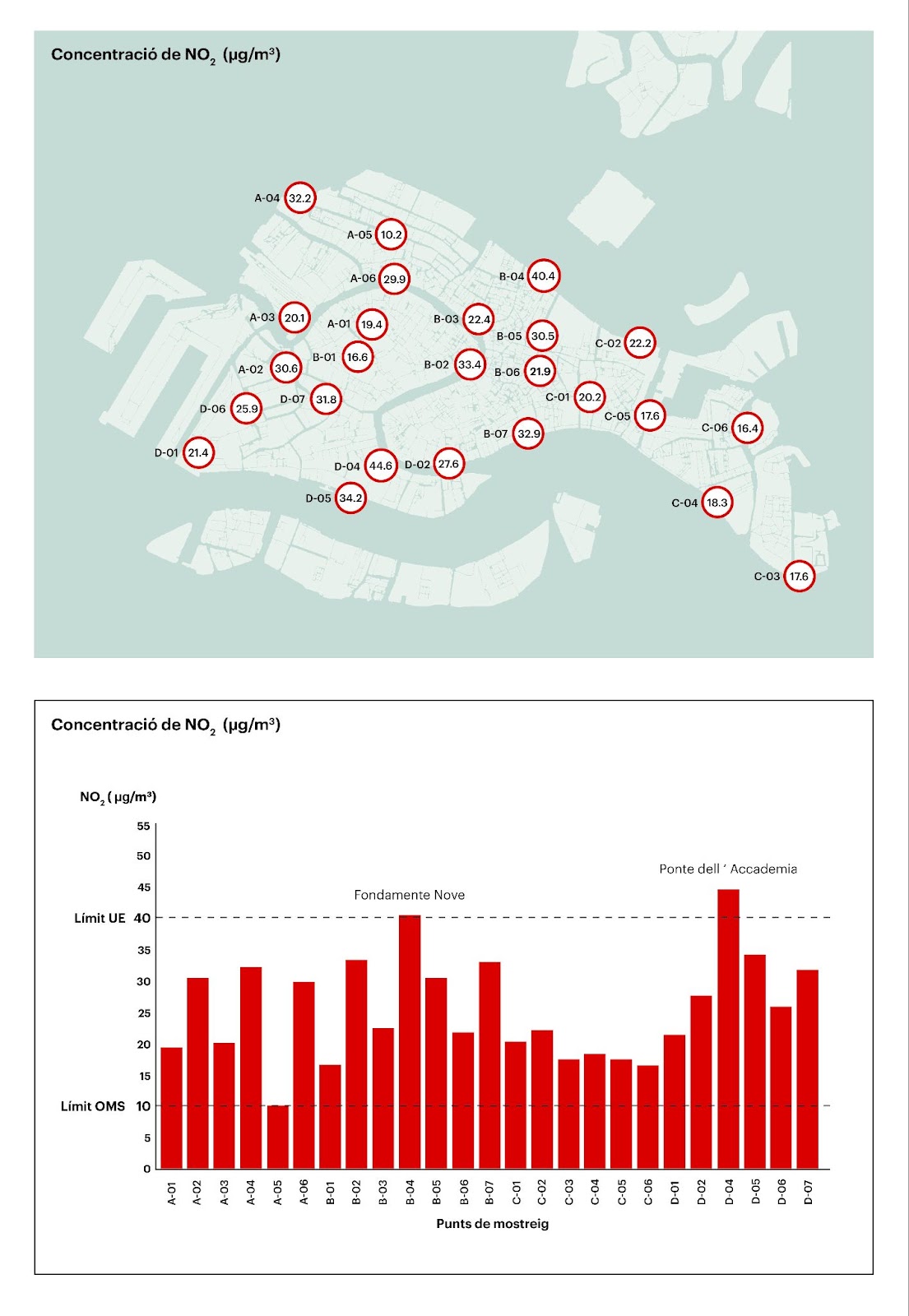 Installation of NO2 passive samplers 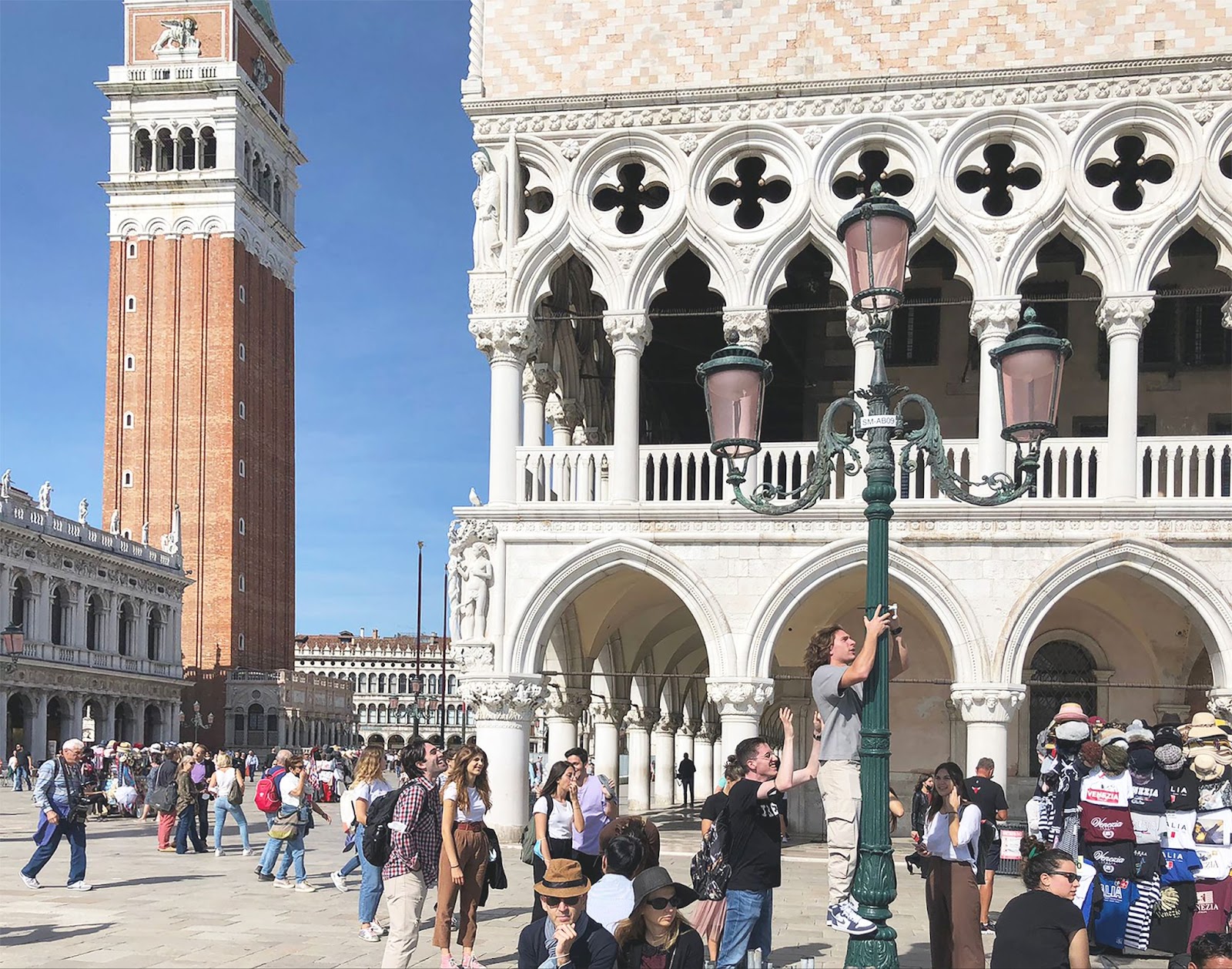 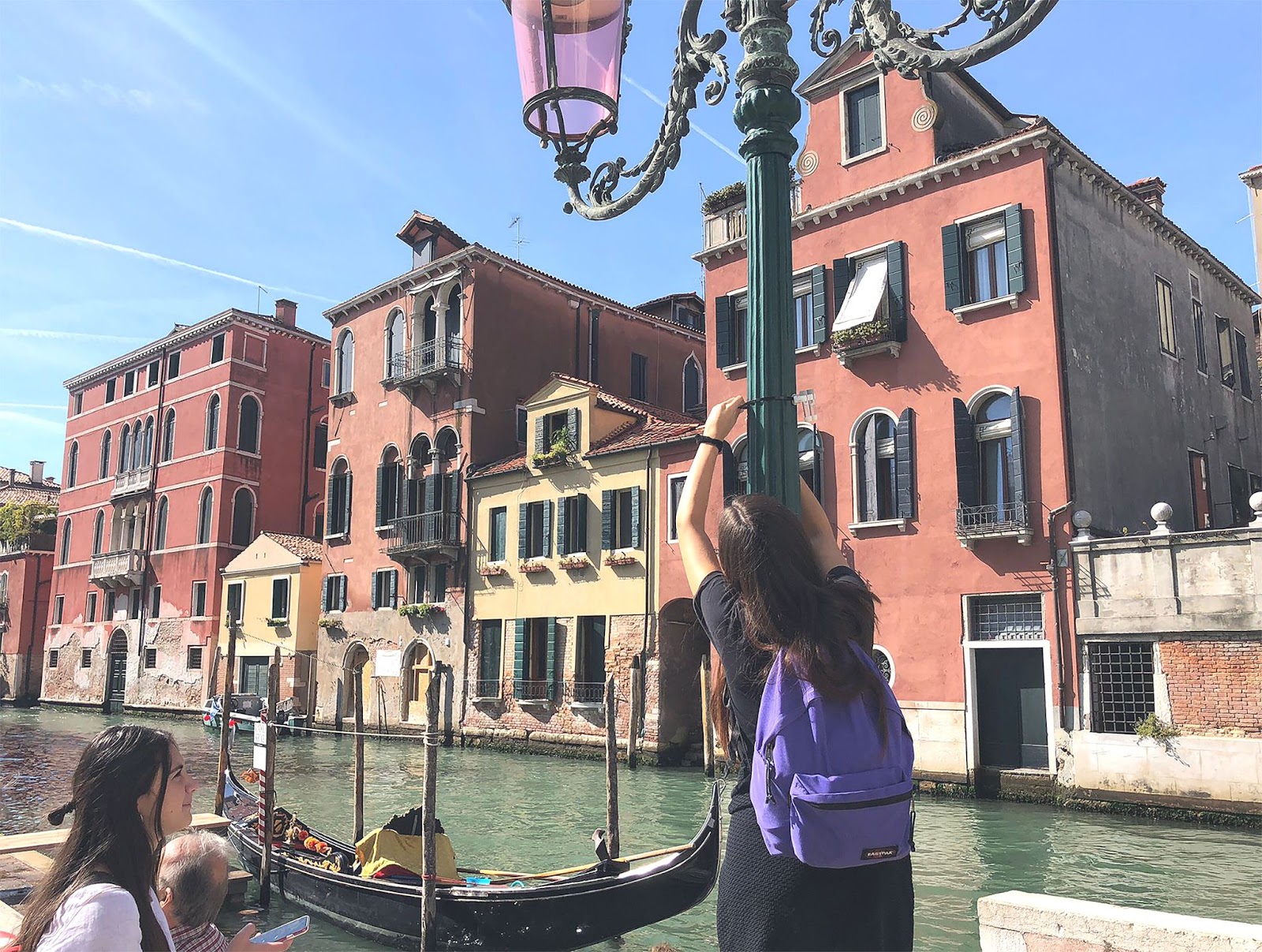 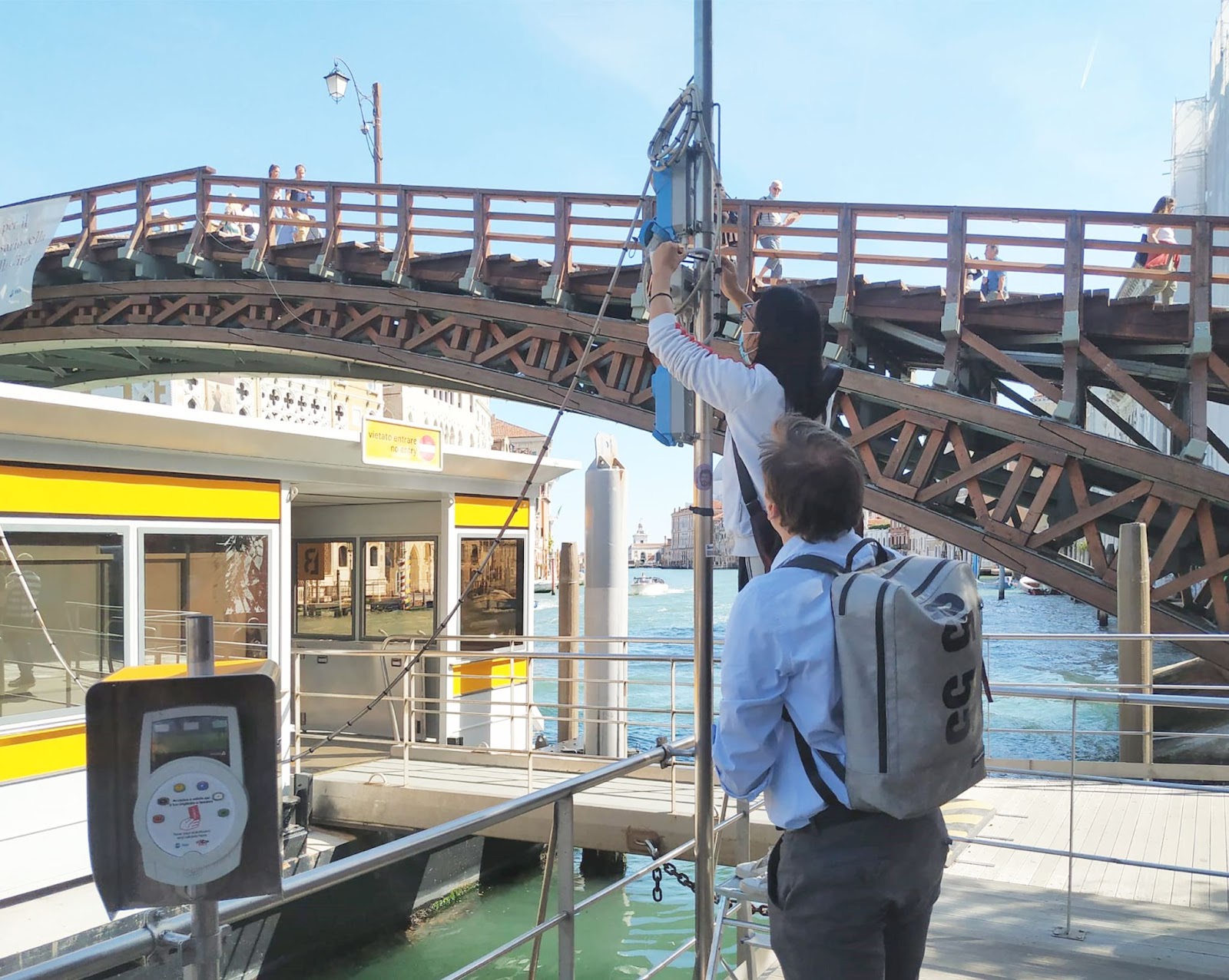 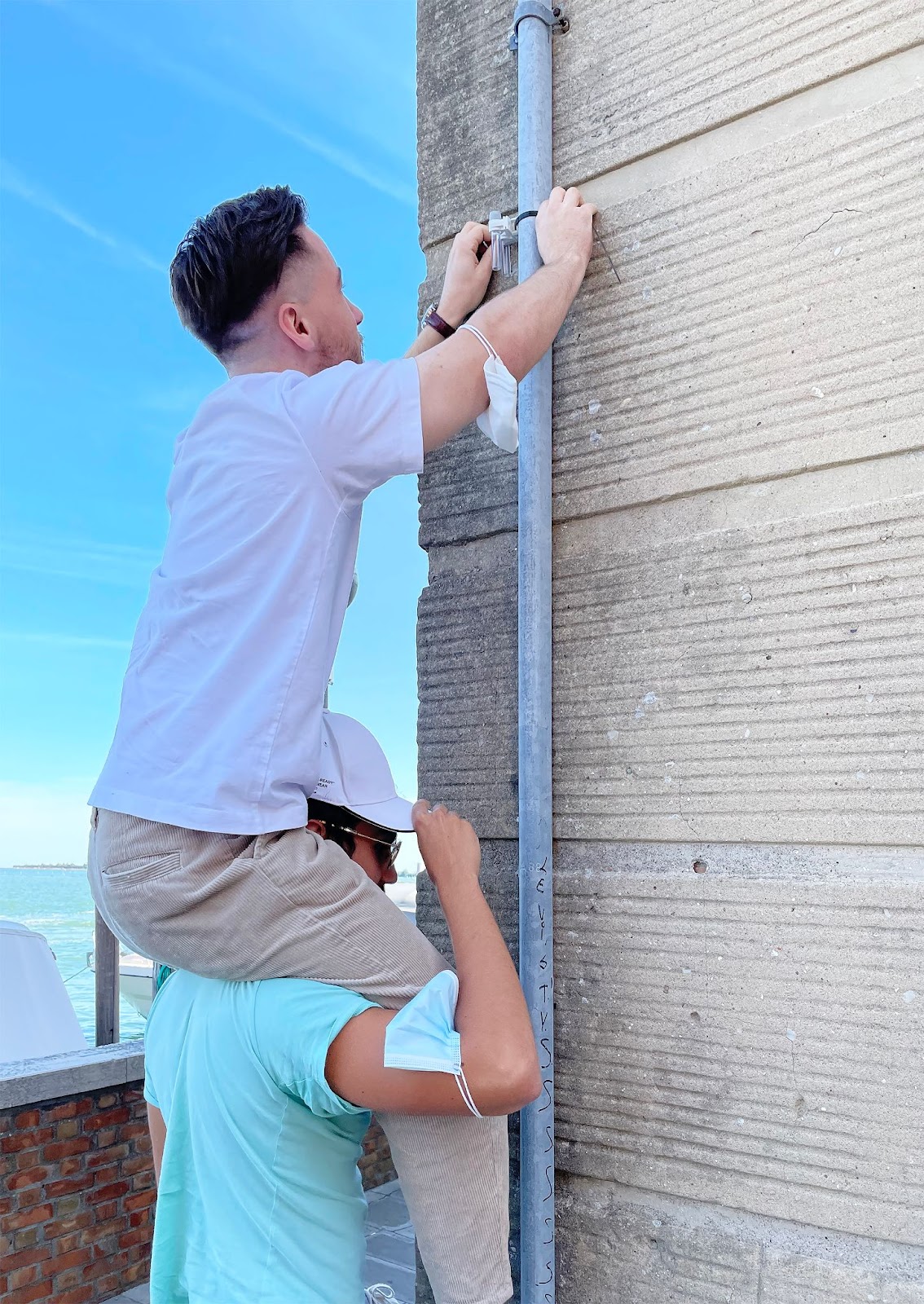 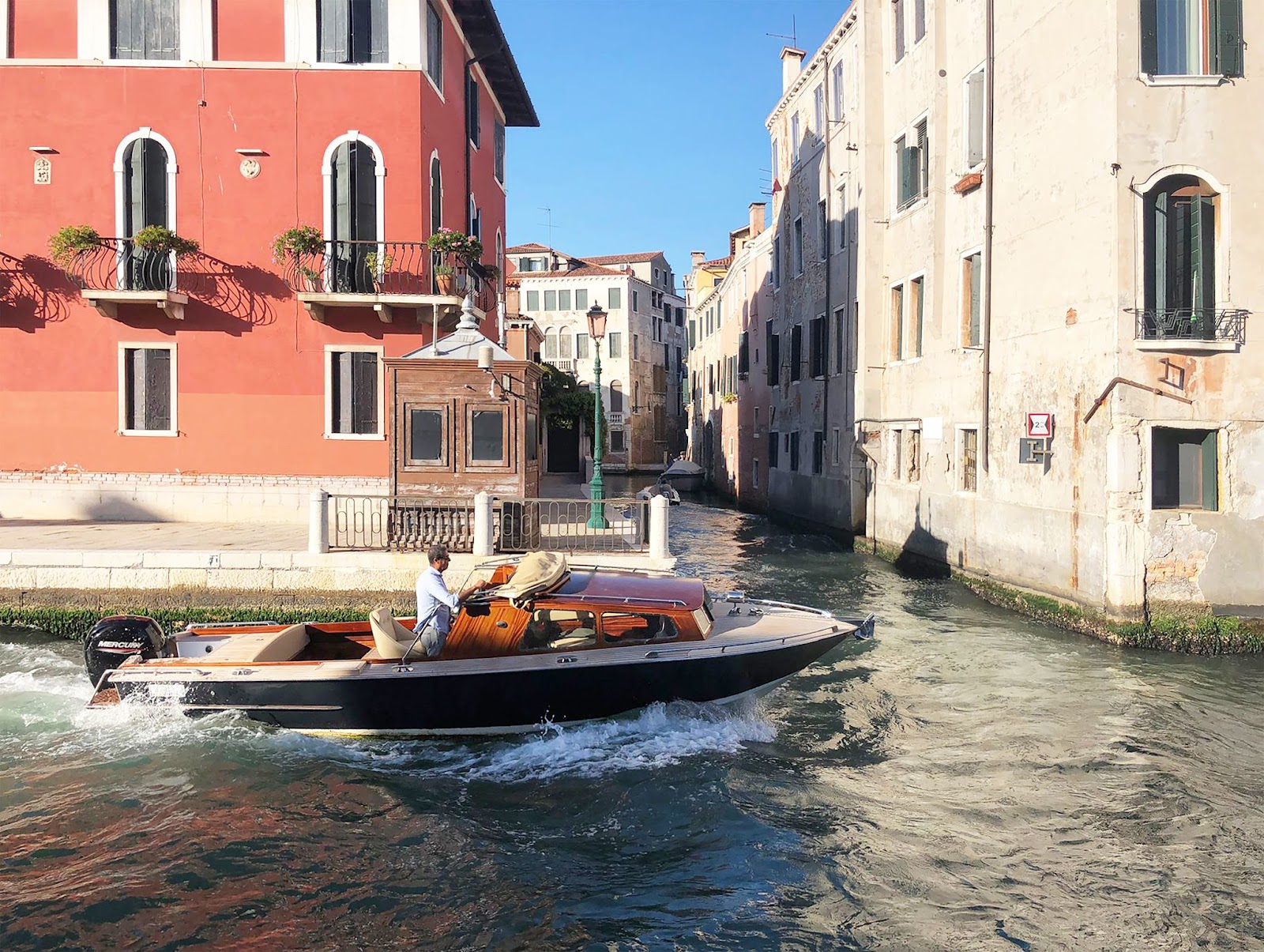 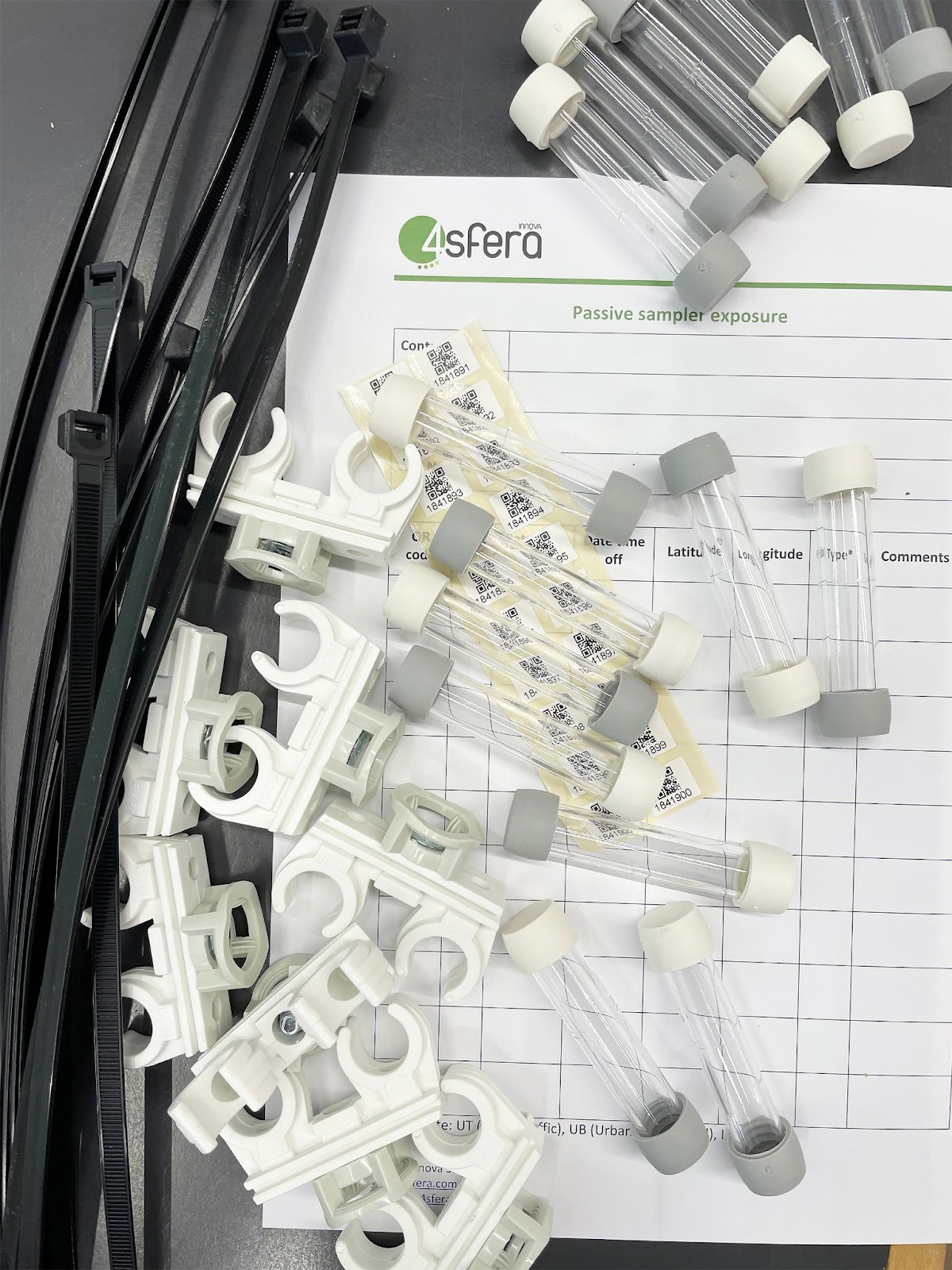 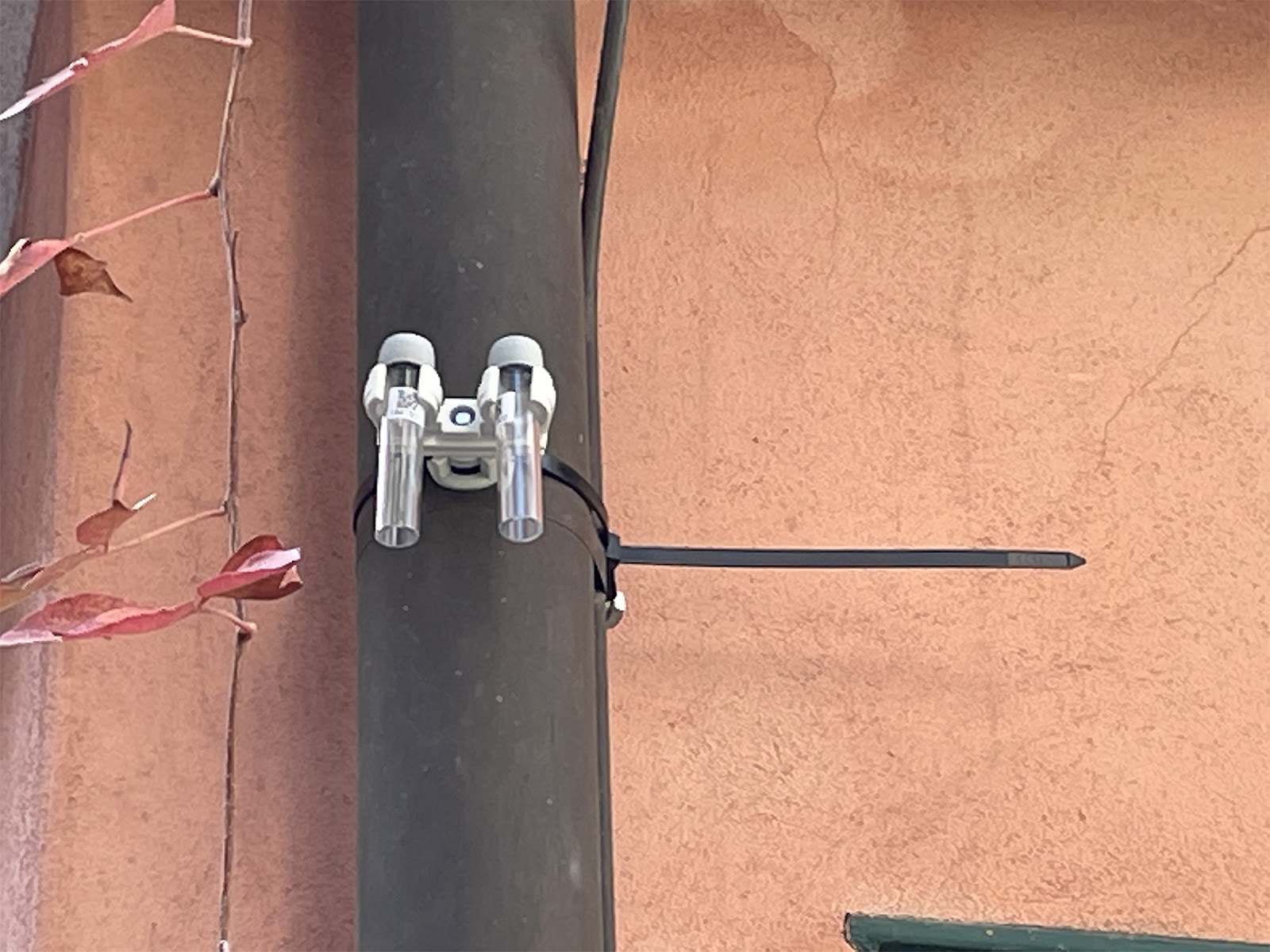 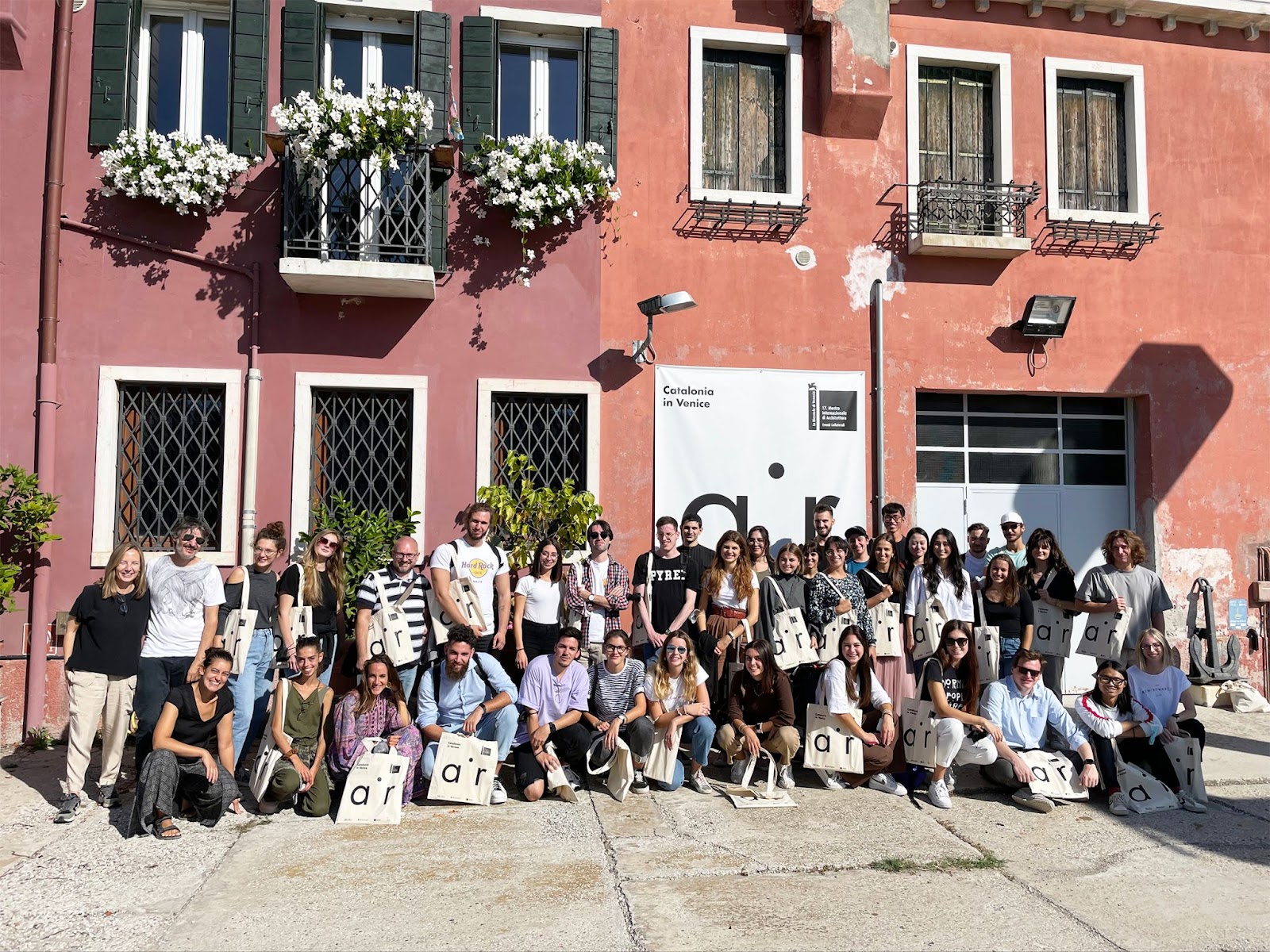