To celebrate the Robert Gerhard Year 2021 in the United Kingdom, the Institut Ramon Llull has prepared an exciting programme of concerts in three different cities: two concerts by the London Sinfonietta, conducted by Edmon Colomer, in Huddersfield and London, and a concert by the Gerhard Quartet in Cambridge. These concerts are part of “Music and Exile” programme of the Government of Catalonia. 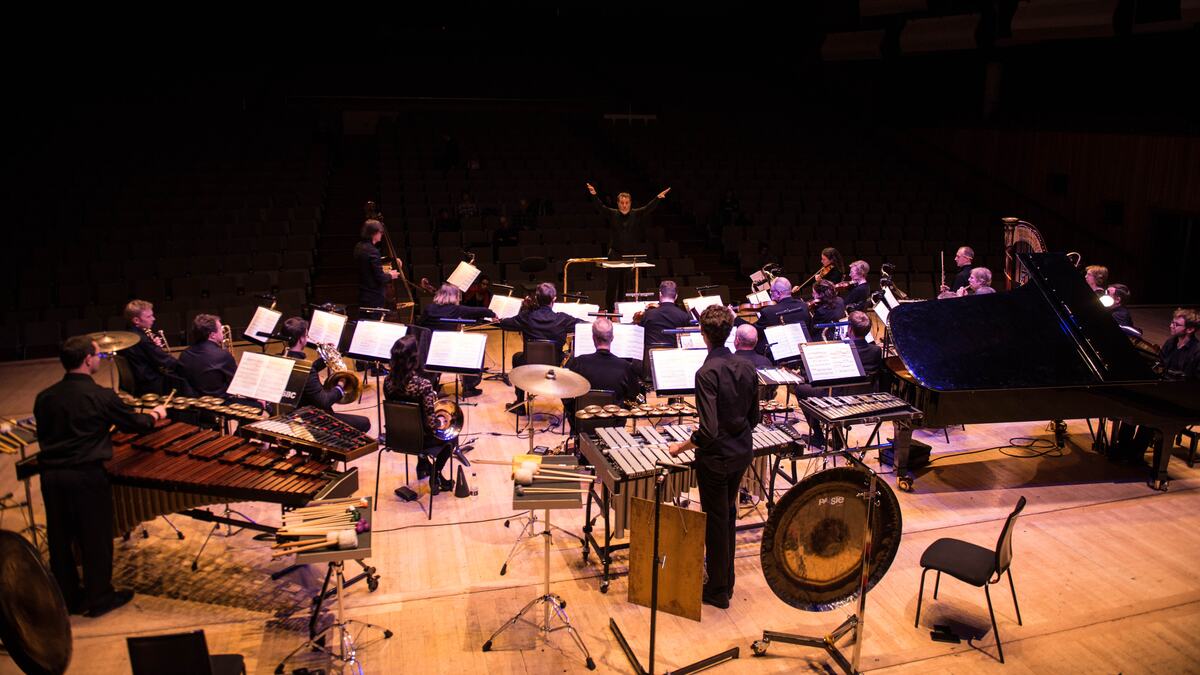 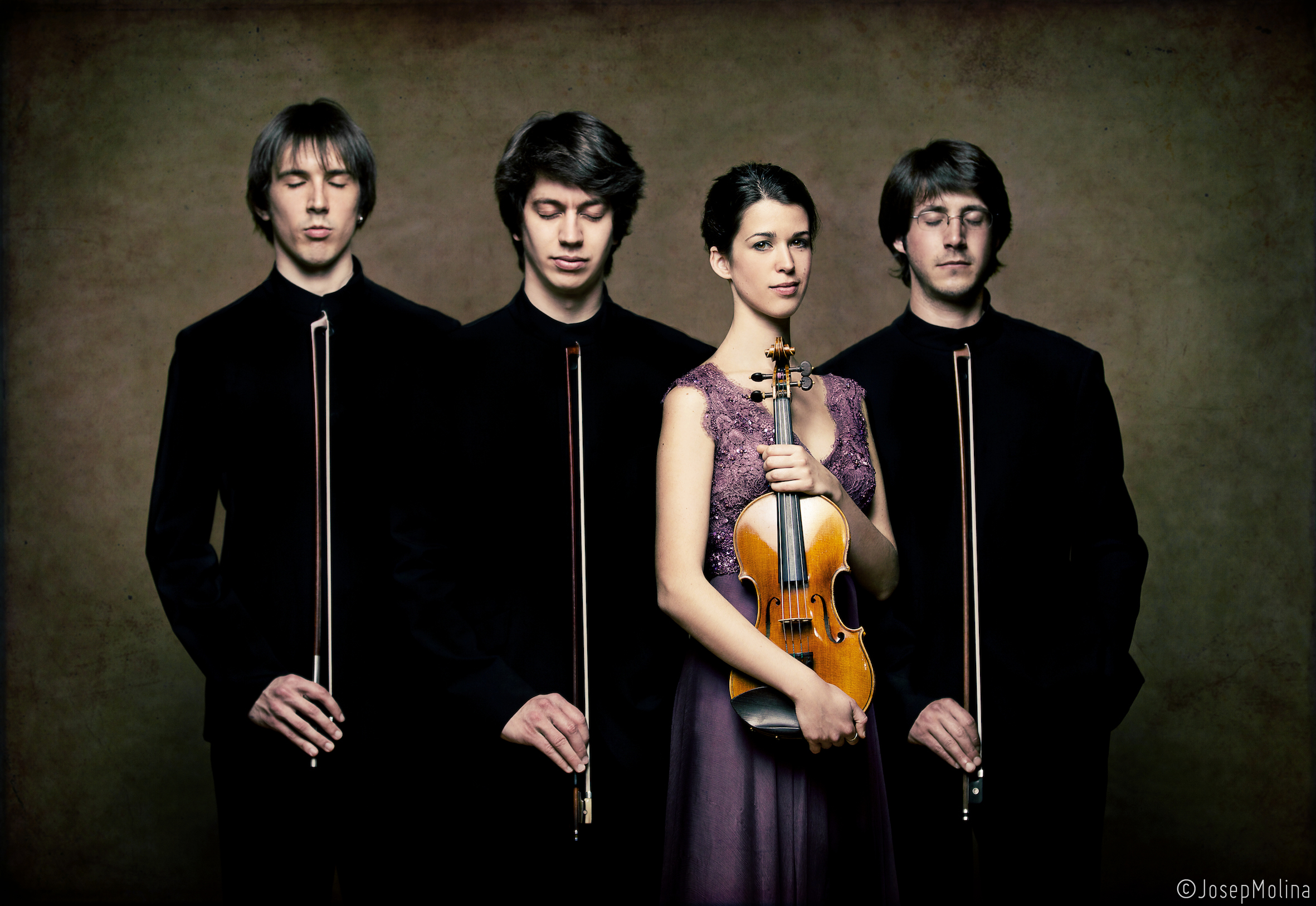 Concerts by the London Sinfonietta – Huddersfield and London

The Robert Gerhard Year 2020-2021 was promoted by the Government of Catalonia to commemorate the 50th anniversary of the Catalan composer's death and the 125th anniversary of his birth. This event has facilitated the organisation of many activities, both inside and outside Catalonia, aimed at raising awareness of Robert Gerhard's visionary musical oeuvre.

Among the programme international activities, special importance was given to the dissemination of Gerhard's music in the United Kingdom, where he lived in exile from 1939 until his death in Cambridge in 1970. For this reason, the commission of the "Music and Exile" programme of the Ministry of Culture promoted the performance of two concerts by the London Sinfonietta with pieces by Gerhard.

With the intention of showing the relevance of Robert Gerhard's musical legacy, the programmes of these concerts also include pieces by two young Catalan composers of contemporary music: Raquel García-Tomàs and Joan Magrané. And also a piece by Lisa Illean, an Australian composer based in the United Kingdom, of the same generation as García-Tomás and Magrané.

The programming of Lisa Illean's work responds to the Institut Ramon Llull's desire to bring Catalan musical creation into dialogue with international creation, a line of work that is also being carried out in other artistic disciplines. Illean was selected jointly by the teams of the Institut Ramon Llull, the London Sinfonietta and the Huddersfield Contemporary Music Festival.

The Institut Ramon Llull has provided support for the concerts of the London Sinfonietta, one of the most internationally renowned contemporary music ensembles, which will be conducted by Edmon Colomer, a conductor of distinguished trajectory and commissioner of the Robert Gerhard Year. These are the details of the two concerts:

In addition to concerts by the London Sinfonietta, the Gerhard Year in the UK will be rounded off with a concert by the Gerhard Quartet at Fitzwilliam College, Cambridge University. The concert will be in the Chapel, 29 November, 19:45h. The concert is entitled "Gerhard Quartet plays Gerhard. The Viennese School" and will offer a programme with one piece by Gerhard and one by Schubert. The concert is in collaboration with the Faculty of Modern and Medieval Languages at Fitzwilliam College, which has a long tradition in Catalan studies.

The Gerhard Quartet is considered one of Europe's most highly acclaimed string quartets, and has already received a number of important awards and recognitions.

Protagonists of Robert Gerhard's concerts in the United Kingdom

Robert Gerhard (1896-1970) is considered the greatest exponent of 20th century Catalan music. Son of a Swiss father and an Alsatian mother who settled in Valls, his rich personality covers the facets of pianist, composer, pedagogue, promoter, musicologist and intellectual. His style was initiated in “musical nationalism”, having been the last student of the composer Felip Pedrell (1841-1922), and culminated in the style defined by Anton Webern as “New Music”, through his studies with Arnold Schönberg (1874-1951) in the cities of Berlin and Vienna, making Gerhard a great personality.

After studying with Enric Granados and Frank Marshall (piano), between 1916 and 1921 he studied musicology and composition with Felip Pedrell. He collaborated with the Archive of Ethnography and Folklore of Catalonia (AEFC) collecting oral songs. In 1923 he moved to Vienna to study with Arnold Schönberg, with whom he worked until 1928. In 1931, with the arrival of the Republic in Spain, he was part of the Ministry of Culture of the Government of Catalonia, and was appointed professor of music at the Escola Normal. He was part of the revival group Compositors Independents de Catalunya and promoted the Festival of the International Society for Contemporary Music in Barcelona in 1936. In 1939 he went into exile and settled at King's College, Cambridge, where he remained for the rest of his life.

With his adoption of British citizenship in 1960, Gerhard began a period where the internationalisation of his music became more evident. His talent was recognised by conductors such as Leonard Bernstein, who commissioned his Symphony no. 4 “New York” to mark the 125th anniversary of the New York Philharmonic Orchestra. One of the most important works of this late period was The Plague, based on Albert Camus novel, which was premiered in 1964 at the Royal Albert Hall by the BBC Orchestra and Choir conducted by Antal Dorati. In 1968 he was awarded a doctor honoris causa by the University of Cambridge. His extensive oeuvre was an avant-garde revival ranging from neoclassical works to serialism, while also reusing popular melodies.

The London Sinfonietta is one of the most well-known contemporary music ensembles in the world. It is one of the resident orchestras at London's Southbank Centre and each year has a busy schedule of tours around the UK and the world. Founded in 1968, its mission is to place the best contemporary classical music at the heart of contemporary culture, through performances of the highest level and the development of new works and new talents: over the last 50 years it has commissioned almost 400 new works and has premiered many more.

The London Sinfonietta core of Principal Players and guest artists represent some of the finest solo and ensemble musicians in the world. The group also works with talented early-career musicians, to ensure the unique expertise of its Principals is passed on to the next generation of performers. The London Sinfonietta has an extensive catalogue of recordings, published both on prestigious labels and its own label. The London Sinfonietta had already performed pieces by Gerhard in the late sixties, in its beginnings, when David Atherton was its conductor.

Edmon Colomer (Barcelona, 1951) studied with Xavier Montsalvatge and Antoni Ros-Marbà, and continued his training with Hans Swarowsky, George Hurst and Sergiu Celibidache. He is one of the most respected European conductors of his generation. He has been principal conductor of the orchestras Simfònica de Balears, Simfònica del Vallès, Filarmónica de Málaga, Orchestre de Picardie (France), Daejeon Philharmonic (South Korea), and principal guest conductor at the Eastern Music Festival (United States of America). In 1983 he created the Joven Orquesta Nacional de España (JONDE), and in 1988 the Orquestra de Cadaqués.

Raquel García-Tomás (Barcelona, 1984) is a composer specialising in interdisciplinary creation and holds a doctorate from the Royal College of Music in London. Her most outstanding projects include joint creations with the English National Ballet, the Royal Academy of Arts and the Dresdener Musikfestspiele. She has recently been awarded the Premio Nacional de Música 2020 "for the interdisciplinary, innovative and daring character of a singular and unique compositional language". His music has been performed in concert halls in many cities, such as Barcelona, Valencia, Zaragoza and Madrid, but also in Berlin, Dresden, Stuttgart, Amsterdam, Budapest, Vienna, Lyon, Basel, Porto, Edinburgh, Nagoya, Cairo, Rosario, Buenos Aires and especially in London, where she lived for six years. García-Tomás has received commissions and has collaborated with ensembles such as the Oslo Sinfonietta, Phace Ensemble, the Ensemble Contemporani de l'Orquestra de Cadaqués, the Orquestra Simfònica de Madrid, the Orquestra Camera Musicae, SIGMA Project, Experimental Funktion, CrossingLines Ensemble, Cosmos Quartet, BCN216 and PluralEnsemble, among others.

In the field of operatic creation, she has taken part in DIDO Reloaded (2013), produced by Òpera de Butxaca and Nova Creació Barcelona and, thanks to the opera Go, ÆNEAS, go!, has been awarded the Neuköllner Oper's Berliner Opernpreis'14. In 2015, she premiered her chamber opera disPLACE – Història d'una casa (text by H. Tornero and stage direction by P. Pawlik), at the MusikTheaterTage Wien Festival, with further performances in Teatros del Canal within the season 2016/17 of the Teatro Real in Madrid. In the season 2017/18, she premiered the monodrama Balena Blava (text by V. Szpunberg) for one actress, large orchestra, choir and electronics, at the Teatre Nacional de Catalunya. In 2019, she premiered the opera buffa Je Suis Narcissiste (libretto by H. Tornero and stage direction by M. Pazos), within the seasons of the Teatro Real de Madrid, Teatro Español, and the Teatre Lliure in Barcelona. The International Opera Awards have recently nominated Raquel's opera Je Suis Narcissiste for Best World Premiere.

The composer Joan Magrané Figuera (Reus, 1988) has won, among others, the Reina Sofia Prize for Musical Composition (2013). In 2016 he was a laureate of the Académie de France, residing at the Villa Medici in Rome, and during 2017 and 2018 he was a member of the Académie de France in Madrid, residing at the Casa de Velázquez. A student of Ramon Humet and later of Agustí Charles at the ESMUC and of Stefano Gervasoni at the Paris Conservatoire, Magrané highlights, some poetic and artistic references: from Ausiàs March, Joan Roís de Corella to Francesc Garriga and Jaume C. Pons Alorda, from Marià Fortuny to Joan Miró and Jaume Plensa, are crucial in his creative process. Also very close to him are the music of the fathers of European polyphony: Josquin Desprez, Orlando di Lasso and the father of opera and model of Renaissance composer, Claudio Monteverdi.

Magrané's creative memory also includes the leading musicians of Catalan modern musical tradition: Enric Morera, Joaquim Serra, Manuel Blancafort, Juli Garreta, Eduard Toldrà, Frederic Mompou, Robert Gerhard. Since being awarded the XXXI Reina Sofia Composition Prize (2014), Magrané has received some commissions and has seen his work premiered all over Europe, with special interest in France. He has subsequently been composer-in-residence at La Pedrera (Barcelona 2018-19) and at the Faber Residency (Olot, 2018) and has been appointed guest composer for the 2019-20 season at the Palau de la Música Catalana, as well as composer-in-residence at the CNDM, in Madrid, for the 2020-21 season.

The Quartet Gerhard is considered one of the European string quartets with the greatest projection, and is distinguished by its remarkable sensitivity and deep respect for music as one of the greatest human values. As a quartet, its main influences have been in Basel (Rainer Schmidt) and Berlin (Eberhard Feltz). In 2018 they graduated from the prestigious Hochschule für Musik und Theater Hannover with a Master's degree in chamber music with honours. Winners of several national and international awards, the Quartet Gerhard has participated in important international stages such as the Muziekgebouw (String Quartet Biennale Amsterdam 2020), chamber music season Stadt-Casino in Basel (Switzerland), the Bordeaux String Quartet Festival and the Festival Radio France Montpellier (France), the Mozartfest in Würzburg and Heidelberger Frühling (Germany), the Musikamera season at La Fenice in Venice (Italy), the Muzenforum cycle in Bloemendaal (The Netherlands).

The quartet has also been invited to well-known summer festivals such as the Schubertiada in Vilabertran, Festival Pau Casals in Vendrell, Porta Ferrada, Aix-en-Provence and Verbier. From the 2018/19 season they are resident artists at the Palau de la Música de Barcelona and the Auditori Josep Carreras in Vila-seca. Their commitment to new music is remarkable, performing at important events such as the CNDM cycle in Madrid, Nuit de la Création in Aix-en-Provence and at the Arnold Schoenberg Center in Vienna. His performances have been broadcast by Catalunya Música, RNE (Radio Nacional de España), NDR and SWR (Germany), and BBC and France Musique. As for its recordings, the album Portrait (Seed Music 2016), which won the critics' prize for the best classical music CD of that year, and a release with works by Kurtag, Berg and Schumann on the Harmonia Mundi International label, are worthy of special mention.

The London Sinfonietta concerts will be conducted by Edmon Colomer, a conductor with a distinguished career and commissioner of the Robert Gerhard Year.