The Institut Ramon Llull presents Catalonia in Venice - air/aria/aire, a Collateral Event of the Biennale Architettura 2021 and an exhibition curated by architect Olga Subirós. The project reflects upon the central theme of the Biennale, ‘How will we live together?’, with an investigation into air as a common asset uponwhich our survival depends. Under the name Aire, the exhibition highlights the role of architecture and urbanism within the context of two interconnected global crises: the climate emergency and the public health crisis. This curatorial project aims to seek solutions to these interconnected crises through an investigation into air pollution and how it directly affects people. The exhibition offers an immersion into the radical experience of air contamination through a large, multisensory installation. 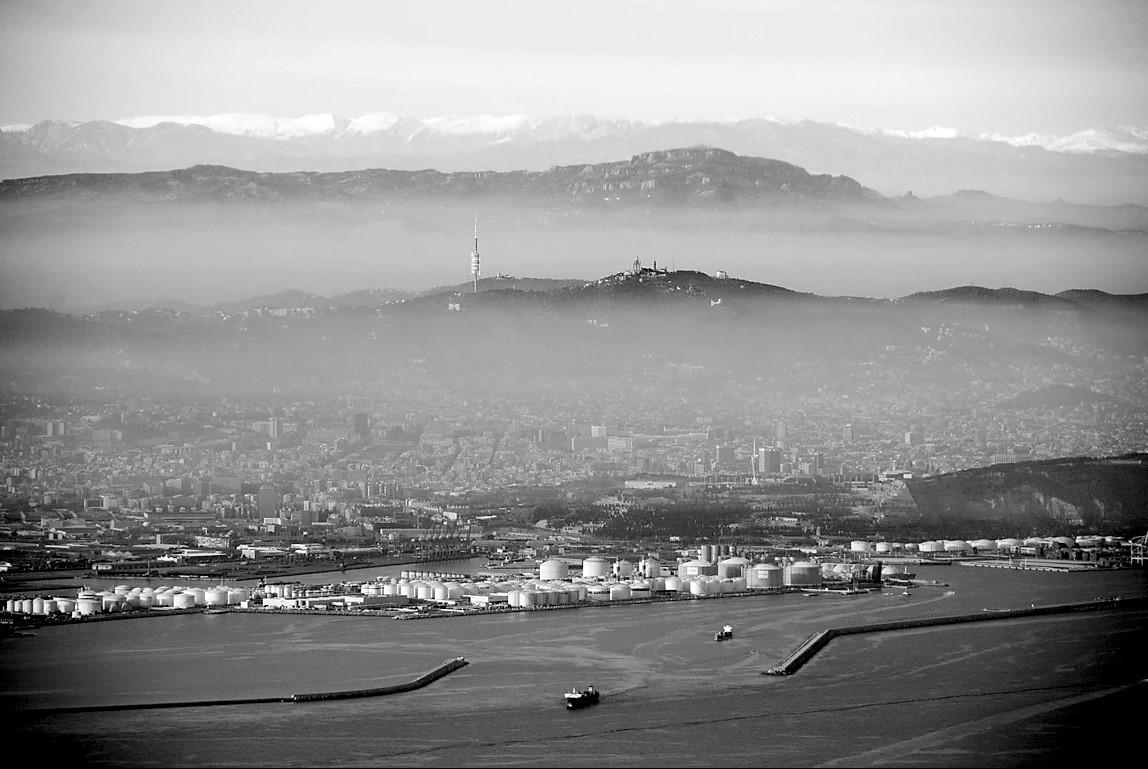 NOTE:We inform you that as of August 6, 2021, in compliance with the Decreto Legge n. 105 of 23 July 2021, every person must present an EU Covid Certificate (Green Pass) to access the exhibition areas of the 17th International Architecture Exhibition at the Giardini and the Arsenale.

Catalonia in Venice - air/aria/aire has as its starting point the urgent redesign of air and theneed for a change in the city model.The exhibition is based on research that reveals a great opportunity to act locally against air pollution in cities with an immediate positive impact. The research for the Biennale Architettura takes the city of Barcelona, one of the most polluted cities in Europe, as a case of study and focuses on a study of the city through the application of digital technologies to analyse big data, viewed as an invaluable tool to foster citizen empowerment and to guide architects in the design of more sustainable, healthy and just cities. The exhibition focuses on the analysis of big data to benefit the public and identifies actions needed to rethink urban design and the need for access to open data. Cities, as prolific producers of data, must be able to pro-tect the sovereignty of this public and private data, so that it works for the common good. The project propos-es a revision of the concept of ‘smart cities’in which the use of technology is not the solution, but rather a toolto constantly renovate the social pact. The research is also particularly relevant within the context of the COVID-19 health crisis. Numerous studies have pointed to air pollution as a contributing factor towards the higher rate of COVID-19 cases in urban areas. This makes the right to breathe clean air, on which this pro-posal is based, all the more important. Epidemics have always been an opportunity to accelerate the introduc-tion of urban planning measures aimed at improving health in cities. This new public health crisis, along with critical levels of air pollution and the climate emergency, emphasises the need to adopt sustainable, healthy urban planning measures supported by an interdisciplinary, collaborative, participative model that incorpo-rates data.

To address this problem, the projects counts on the architects’studio 300,000Km/s, specialised in the analy-sis of urban data for new urban challenges, to produce cartographic evidences identifying vulnerabilities and impacts of air pollution and actions to change the city model.The exhibition will present the results of a project to create new cartographies of the city of Barcelona and of Catalonia, based on an examination of architectural, urbanistic, atmospheric and health data. A fundamental aspect of 300.000Km/s’s investigationis the active participation of experts from Catalonia’s scientific community and public sector. The cartographieswere created by 300.000Km/s using a vast range of information, fromCopernicus - European Space Agency (ESA)data to numerical models established by various public and private research groups in Catalo-nia. Examples of the latter include CALIOPE-Urban, an air pollution simulation project carried out by the Bar-celona Supercomputing Centre (BSC); the company Lobelia predictive model; data from the Government of Catalonia’s Network of Weather Stations; data from IDEA (CISC) and studies on health impact from the IS-Global institute and from Barcelona City Council’s Public Health Agency.

Olga Subirós, who also designed the architecture of the exhibition space, offers a large-format, immersive experience that brings visitors closer to three aspects of air pollution: its materiality, its apparent invisibility, and its impact on our cities. A large audiovisual installation presents the vulnerabilities, impacts and opportu-nities revealed by 300.000Km/s’s investigation that set the guidelines for sustainable, healthy urban plan-ning. The installation takes on another, particularly sensory dimension with the notes of an evocative new musical composition, performed by Maria Arnal and composed with Oriol Riverola, aka John Talabot, a polyphonic aria that questions who the air belongs to and who is responsible for safeguarding it.

Catalonia in Venice - air/aria/airee is an investigation into new working methodologies, allowing a radi-cally different analysis of the cities we live in and the future opportunities for these urban environments. It will also include cartographic evidences from data collected by architectural students of Barcelona and Venice during the citizen science workshops "xAire" developed by the Open Systems-University of Barcelona and "VenicAir" s.Ideas for Change and l.IAAC. The investigation will be explained in a monographic edition of the Quaderns d’Arquitectura i Urbanisme(‘Architecture and Urbanism Workbooks’) journal, published by the Architects’Association of Catalonia(COAC). The Institut Ramon Llull and the COAC have signed an agreement for the journal, with a national and international circulation of around 8000 copies, to be the new outlet for the scientific dissemination of the content produced by Catalonia in Venice for each edition of the Biennale Architettura.

Olga Subirós is an architect and curator of exhibition projects that provide an integrative approach to twenty-first century culture and the far-reaching transformations of the digital era. Alongside José Luis de Vicente, she was the curator of Big Bang Data, an exhibition on the datafication of the world presented in venues including the Singapore ArtScience Muse-um and the MIT Museum, the contents of which were adapted and extended for each centre. In 2016, Olga Subirós won the international competition for the Data Square exhibition at the EPFL-ArtLab in Lausanne. She also designed the exhibi-tion on chef Ferran Adrià’s creative process and the El Bulli restaurant held at Somerset House in London, Boston Science Museum, and Fundación Telefónica in Madrid. She is also behind the staging of the exhibition Esteu a punt per a la tele-visió? (‘Are you ready for television?’), curated by Chus Martínez at the MACBA, and of over a dozen exhibition projectsat the CCCB. Olga Subirós is a lecturer on the Data and Design master’s course at Escola Elisava-Universitat Pompeu Fab-ra.

300.000 km/s is a pioneering urbanism studio in macrodata-based strategic planning. Its installations combine the analy-sis and the visualisation of data on cities to improve their inhabitants’quality of life. This studio has put exhibitions on atthe Chicago Architecture Biennial (2019), Madrid’s Casa Encendida (2017), the Museum of Contemporary Art in Chicago(2014) and the CCCB (2014). Founded by Mar Santamaría and Pablo Martínez, 300.000 km/s has been awarded the Manuel Solà-Morales Catalonia Urbanism Prize 2020, the CSCAE National Urbanism Prize in 2019 and the S + T + ARTS Prize from the European Commission in 2019, with the urban planning project Pla d’Usos de Ciutat Vella de Bar-celona (‘Usage Plan for Barcelona’s Old Town’).

Oriol Riverola aka John Talabot is a Catalan DJ, producer and electronic musician. He is the first Spanish electronic pro-ducer to take a firm leap into the international spotlight and thereby setting a precedent, beginning with two maxi on Per-manent Vacation in 2009, "My Old School" and “Sunshine”. His enveloping and nuanced house music definitely con-quered the international scene with 'ƒIN', his only solo album to date, which received a 5-star rating from The Guardian.

Arnal's artistic process investigates the transmission of oral culture in the digital age, striating from the oral tradition of the Iberian Peninsula. She has released three albums with the musical accompaniment of Marcel Bagés on electric guitar: Remescles, acoples i melismas (EP, 2015), Verbena (EP, 2016) and 45 cerebros y 1 corazón (LP, 2017). He has just re-leased his fourth album Clamor (LP, 2021) with Marcel Bagés and the musical production of David Soler and the collabo-ration of Kronos Quartet, Holi Herndon, Morphosis Ensemble and Tarta Relena, to great public and critical acclaim.

The Institut Ramon Llull has been promoting, producing and organising Catalonia’s participation in the Collateral Events atthe Biennale di Venezia since 2009. It is a public institution dedicated to the international promotion of the Catalan lan-guage and culture. The project to be presented by the Llull Institute in Venice is chosen by an expert committee that changes every year. Fot the Biennale Architettura 2021, the project was chosen by Assumpció Puig, the dean of the Archi-tects’Association of Catalonia (COAC), alongside committee members Pau de Solà-Morales, president of ARQUIN FAD;Pep Quílez, vice president of the Young Architects’Association of Catalonia (AJAC); Pati Núñez and Estel Ortega, curatorsof the Collateral Event from Catalunya at the Biennale Architettura 2018(one vote between them) and Francesc Serés, head of the Creation Department at the Institut Ramon Llull.