With focus on the 20th and 21st centuries, this recording showcases six song cycles by Frederic Mompou, Eduard Toldrà, Joan Comellas, Ricard LaMotte de Grignon, Narcís Bonet, and finally a world premiere recording of a new commission by living Catalonian composer, Elisenda Fábregas. This project not only furthers the scholarship in Catalan vocal literature, but also celebrates in song the human journey that is both tender and boisterous. 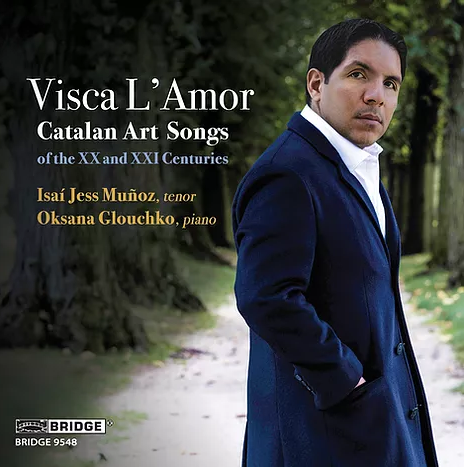 As compared to the vast reference material devoted to the history and analyses of North American and other Central European classical song literature, little scholarly attention has been devoted to the art songs of Catalonia, the autonomous community in Spain. The repressive effects of the Spanish Civil War and Franco’s dictatorial ban on this region’s native language, Catalan, contributed to scarce diffusion of its classical song literature abroad. General public knowledge of Catalan art song stems primarily from the extant recordings of a few internationally revered native singers such as Victoria de los Ángeles and Montserrat Caballé. Despite the work of these extraordinary artists to champion the endangered music of their homeland, much work remains in order to achieve a deeper understanding of this music internationally. This recording aims to illuminate this nationalistic genre—its history and its style—and also provide a context for understanding the performance practice, so that Catalan art song of the twentieth and twenty-first centuries may continue to gain recognition.

​Spain’s landscape is vast, and Catalonia—joined by Castile, Andalusia, Galicia and the Basque country—enjoys its own customs and style. Indeed, Catalan art song has a distinctive musical voice and heritage, strongly influenced by its exchange of ideas on Impressionism and Neoclassicism with France. It’s important to note that areas of the French département of the Pyrénées-Orientales, recognized as Catalogne Nord (Northern Catalonia), was once part of the former Principality of Catalonia. Although ceded to France by Spain (1659), this region still retains much of its Catalan culture. The Catalan language is also spoken in the Principality of Andorra in Alghero, Italy, and other regions of the world.

Since 2010, concerts of Catalan art songs presented by the formidable duo of Isaí Jess Muñoz and Oksana Glouchko have generated overwhelming responses from audiences eager to hear more of this fascinating repertoire. Through these encouraging interactions, they were inspired to create this audio recording. History illustrates that something emerges from the human compulsions to look and record, to contemplate, even as we mourn. Much like the civil unrest and physical displacement endured by Catalonian artists, such as Frederic Mompou, Ricard Lamote de Grignon, and many contemporaries, troubled times have been inherent in many compelling artistic journeys; specifically, the frustration of seeing one's hopes and hard work either halted or not fully realized. For these artists, however, creating was an attempt to break free from the constraints of their present state, to draw on what they had already experienced, and to gain understanding of what still lay beyond the known and the present, in order to make peace and a positive difference. Beyond the cry for love of country, or amorous or fraternal affection, the music and poetry contained herein serves as compelling artifacts of human longing and endurance.

Dr. Oksana Glouchko is the full-time collaborative pianist and chamber music coach for faculty and students at the University of Delaware, where she teaches courses in piano literature, collaborative piano and chamber music. She has formerly served as instructor for undergraduate piano performance at Stony Brook University (2009-2012) and maintains an active private studio. In great demand as a collaborator with singers, she held positions on the piano and vocal coaching staffs of Israeli Opera, Opera Delaware, Indianapolis Opera, the IVAI International Festival for Opera Singers, Musiktheater Bavaria (Germany), Rollins College and Indiana Wesleyan University, and as an official pianist for the Metropolitan Opera National Council Auditions.