The delegation from Catalonia and the Balearic Islands as guests of honour at the next Bologna Children’s and Young Adults’ Book Fair, to be held from 3 to 6 April 2017, is beginning to take shape. This morning saw the presentation of the basic outlines of this presence at what the Director of the Institut Ramon Llull (IRL), Manuel Forcano, described as “the most important event in the world in the children’s and young adults’ book sector”. 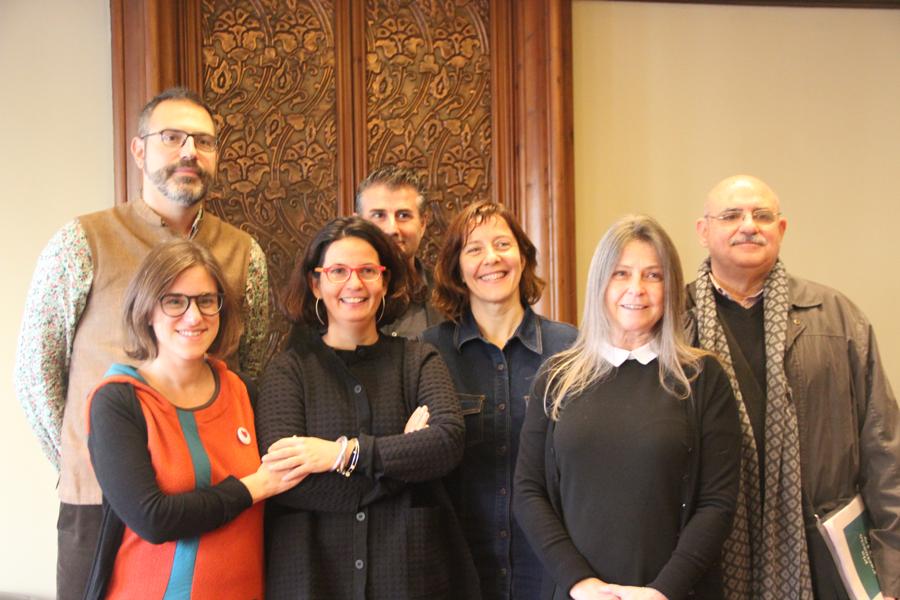 The Head of the Faculty of Literature and Thinking at the IRL, Izaskun Arretxe, drew attention to the importance of children’s and teenagers’ literature, “third in the total publishing turnover in Catalonia”. She also indicated that “we will be sending a large landing party” to Bologna and that activities aimed at industry professionals and the city will be organised at the fair. “We want to flood Bologna with Catalonia’s books for children and young adults”, she said. Arretxe gave a broad overview of the Catalan and Balearic programme for Bologna. Within the fair, there will be a large display, a stand mounted collectively and activities and presentations for professionals. In the city, there will be an exhibition at the Archiginnasio, activities in the Salaborsa Library, a season of theatre for children and young adults at the Teatro Testoni, a film season at the Cineteca and two activities at the University of Bologna: a seminar on translation and a symposium with experts in literature for children and young adults.

According to the Director of the Balearic Studies Institute, “Catalan culture in its entirety will be at Bologna and that, for us, represents a historic achievement that we hope will have an impact for many years to come”.

The curator, Paula Jarrin, appointed following a public competition organised by the IRL, has presented her proposal for the two exhibitions mounted by the guest of honour at the Bologna Children’s Book Fair each year. The first of these exhibitions occupies the central space in the fair complex. In this show, Jarrin is proposing the work of 42 illustrators, most of them under the age of 40. The selection includes creative figures from Catalonia, the Balearic Islands and Valencia, all of whom have published at least one work.

The exhibition has been designed as a vast bookshop, in keeping with Jarrin’s initial idea, and will feature a large mise-en-scène by the architect Clara Solà-Morales. The installation is intended to provide a restful space at the heart of the fair. A series of long lengths of fabric will take the form of hammocks, inviting the visitor to sit and read the books that the curatorial project proposes. The hammocks will be arranged one after another, creating a clear and measured rhythm. Printed on the outer part of the hammock will be the main details that the exhibition wishes to convey; on the inside will be information for people who want or are able to devote more time to it. In accordance with the curator’s proposal, there will be 42 hammocks, each devoted to a particular illustrator, and they will be arranged in four different sectors: small readers, early readers, narrative and illustrated story books.

In drawing up the list, Jarrin took two catchphrases as her starting point: the motto used to present the guest of honour this year, “Sharing a Future”; and a comment by Teresa Duran, “Good literature has the smell of truth about it”. Her selection is intended two fulfil two aims, which are “to raise awareness of the talent of our country and of literature for children and young adults in Catalan, and also to show how we have got to where we are today”.

At the fair, it will be possible to see the very latest in illustration from Catalonia, while the exhibition at the Archiginnasio (which formerly housed the city’s university) will provide an opportunity to look back from the past to the present day. The display in the cloister of this historic building will include pieces from the classics by revered illustrators, the men and women who were the forerunners of those working today. The design of the exhibition, also the work of Clara Solà-Morales, will follow the rhythm of the cloister arcades and will feature lengths of fabric that will give the most striking information about the illustrators. On the ground, setting the pace for the content, visitors will find the key details regarding the illustrators shown on the banners.

According to Jarrin, Bologna is a “golden opportunity, all the eyes in the children’s and young adults’ world will be on us”. “We are staking our all on this, and that’s why we want to convey that smell of the truth, it will be our perfume. Our literature for children and teenagers is very powerful: the talent, the ideas, the narration in the illustration. We want to move and touch people’s emotions, to make the exhibition an experience and for people to look back, as the years pass, and remember the venture we are embarking on today.”

“A generation that does not read is a generation that is lost”, says Jarrin. Consequently, “it is our joint duty to add to the quantity and quality of readers. We need to support small and young readers to ensure that they are the adult readers of tomorrow, creative figures and idea generators. The future, in short. Boys and girls have characteristics that are universal, the same fears, joys, urge to discover the world, friendship… we have to stimulate their sense and sensibility. That is why we talk about the future, but we mustn’t forget the path paved by those who came before us. Our proposal is all-encompassing: we want to raise the world’s awareness of our illustrators and authors, the work they are doing today, in the exhibition in the fair complex. But we also want to complement that with the work done earlier by paying tribute with the exhibition in the Archiginnasio to those who have shown us the way.”

Paula Jarrin is the representative of the proposal drawn up by Taleia Cultura for the competition organised by the IRL to select the curators. A bookseller specialising in literature for children and young adults, she holds a BA in History and a master’s degree in Historical Culture, Communication and the New Professions, awarded by the University of Barcelona. She was worked in the publishing world and since 2012 has been running Al·lots, a bookshop that specialises in literature for children and teenagers. She also works as a book scout for publishing houses, contributes to digital media that specialise in books, runs training for teachers, and gives talks on promoting reading. She is currently the representative of the Guild of Booksellers on the board of the ClijCAT.

Taleia Cultura is a company with more than 25 years’ experience in managing projects and events associated with the world of reading, publishing and public libraries, among them the Catalan Book Week, Forbidden Culture Week, the Litterarum Performances in Catalan Fair, and the Edita Barcelona Forum.

Clara Solà-Morales, from the Cadaval & Solà-Morales studios, has developed and built projects in Spain, Mexico and the United States. In 2007, they were considered one of the top ten young offices in the world by Wallpaper Magazine (London), and the following year, Architectural Record, the official magazine of the American Institute of Architects, regarded them as one of the ten most avant-garde offices on the international scene. They have received a number of international prizes, among them the Bauwelt Prize (Munich), the Young Architects Prize from the Association of Architects of Catalonia (Barcelona), the Design Vanguard Award (New York) and a Mention of Honour for Young Architects at the Eleventh Spanish Architecture Biennale (Madrid). The studio specialises in ephemeral architecture and housing.